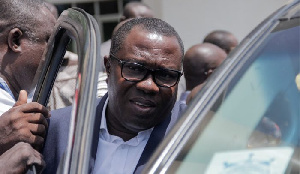 An application by lawyers of the embattled National Chairman of the National Democratic Congress (NDC), Samuel Ofosu-Ampofo seeking stay of proceedings at the High Court pending an appeal at the Court of Appeal, challenging the decision of the High Court to adopt the controversial witness statement of the first prosecution witness, Benjamin Osei Ampofo Adjei, a staff of Multimedia Group (Adom FM) has been refused.

The state, led by the Director of Public Prosecutions (DPP), Yvonne Atakora Obuabisa, on the of January 29, 2020, called its first witness. The witness identified himself to the court as Benjamin Osei Ampofo Adjei and indicated to the court that he works with the Multimedia Group (Adom FM) as an Akan newscaster, reporter and a sit-in host for the morning show in the absence of the regular host.

The controversy started when the witness told the court presided over by Justice Samuel Asiedu, a Justice of the Court of Appeal sitting with additional responsibility as a High Court Judge, that the witness statement filed by the state was brought to him by a Police Officer and without reading it he signed same.

The witness sought to distance himself from the witness statement that had his signature on it, a development that took the court aback.

Today in court, lawyer for the first accused person, Tony Lithur, in moving his motion for the stay of Proceedings indicated that he has filed an appeal against the ruling of the High Court, made on the 29th of January 2020, which essentially adopted the witness statement of the first prosecution witness.

Additionally, he informed the court that the defence team has filed a Stay of Proceedings pending the determination of the appeal. Lawyer Tony Lithur essentially urged that the witness statement is defective and yet very fundamental to the case since the two accused persons are facing a charge of conspiracy.

He prayed the court to stay proceedings while they seek redress at the Court of Appeal.

The state-led by Chief State Asiamah Sampong opposed the instant application. He explained that there is no law that prohibits the Court from hearing the matter simply because the defence team has decided to appeal a ruling of the Court that essentially adopted the witness statement of the first Prosecution Witness.

Justice Samuel Asiedu’s court in a short ruling dismissed the application of the defence team. He explained that any decision to stay proceedings will simply just result in delaying the trial of the case and nothing else.

“The application for Stay of Proceedings is hereby refused” the Court Ruled.

Two NDC officials have been charged in respect of the infamous leaked tape and are being tried at the Commercial Court in Accra presided over by Samuel Asiedu. The tape is said to have captured how the NDC is allegedly planning to commit crimes in the country and lay blame for same on the ruling New Patriotic Party (NPP).

Amongst the alleged strategies are the creation of a general state of insecurity in the country through kidnappings and arson, and verbal attacks on public officials like the Chairman of the National Peace Council, Prof. Emmanuel Asante, and the Electoral Commission chair, Jean Mensa.