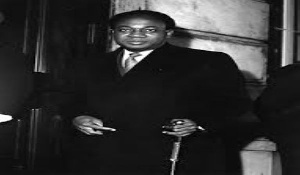 On February 24, 1966, the National Liberation Council (NLC) overthrew Ghana’s first president, Kwame Nkrumah and the Conventions People’s Party (CPP) in a military coup d’état while he was on a peace mission in Hanoi the capital of Vietnam at the invitation of the president, Ho Chi Minh to resolve the Vietnam War.

Lt-Gen Emmanuel Kwasi Kotoka, was one of the leading members of the NLC who staged the most talked about “Operation Cold Chop” coup.

“Fellow citizens of Ghana, I have come to inform you that the Military, in co-operation with the Ghana Police, have taken over the government of Ghana today. The myth surrounding Nkrumah has been broken. Parliament has been dissolved and Kwame Nkrumah has been dismissed from office. All ministers are also dismissed from office. The C.P.P. is disbanded with effect from now. It will be illegal for any person to belong to it,” Emmanuel Kwasi Kotoka announced the successful overthrow of Kwame Nkrumah on Radio Ghana.

Kwame Nkrumah in his book, ‘Dark Days in Ghana’, wrote that the Central Intelligence Agency (C.I.A) of the United States of America aided the Ghana Army at the time to overthrow his government. He died on April 27, 1972, in Bucharest, Romania after being diagnosed with prostate cancer.

Read the full story originally published on February 24, 2019, on Ghanaweb

Today marks exactly 53 years when the former president of Ghana Dr. Kwame Nkrumah was unconstitutionally ousted from office through a military and police coup d’état on February 24th, 1966.

Undoubtedly the most important indication of Nkrumah’s lasting impact is how much better he has done in retrospect than those who overthrew and succeeded him.

He left a stamp on Ghanaian history that continues, long after his death, to fascinate and inspire many people all over the world, especially of African descent.

To this day, Ghanaians continue to “render homage” to his “immortal memory,” even to the point that his weakness and failures have been largely forgotten.

The Coup and its aftermath

Col. E.K. Kotoka, Major A.A. Afrifa and the then Inspector-General of Police, Mr. J.W.K. Harley staged the revolution at the dawn of February 24, 1966, while Nkrumah was still on a peace mission in Asia.

They had announced on the state radio that “Kwame Nkrumah is overthrown, and the myth surrounding him is broken.”

Apparently, Dr Nkrumah was seen as an ally of the then Soviet Union and Eastern Europe during the ‘Cold War’. But the pan-Africanist leader denied any of such accusations.

Several other charges levelled were on the grounds of introducing the Preventive Detection Act, corruption, dictatorial practices, oppression and lastly forcing into retirement the army’s most senior officers which according to the sources was the principal reason for the uprising

It was this action more than any other, according to then Major A. A. Afrifa, that led to the military-police coup which overthrew Nkrumah on February 24, 1966.

Nkrumah had welcomed the military coup that took place in Nigeria a few weeks before and had tried to strengthen the position of the more radical members of the military government that took power. Little did he realize how soon his own demise was to come at the hands of his own military?

The coup itself was welcomed in Ghana with far more enthusiasm than had been the case for independence. Only the Presidential Guard put up a brief resistance, and within 24 hours the coup was over. Nkrumah’s statue outside Parliament House, which proclaimed him the founder of the nation, was battered to the ground and smashed into pieces.

Following the night after the coup, there were demonstrations of support for the new rulers, who styled themselves the National Liberation Council (NLC). Even members of the 74-man delegation that had accompanied Nkrumah to China at a time the coup happened deserted their former leader.

Foreign Minister Quaison-Sackey, who Nkrumah had sent to protest the seating of the new Ghanaian government’s mission at the OAU meeting in Addis Ababa, flew instead to Accra, where he pledged his loyalty to the new military government.

The prisons emptied of Nkrumah’s detainees and began to fill with new political prisoners. The CPP, with its 2-million strong membership and 500,000 militants, offered no resistance, and the party allowed itself to be disbanded by a single radio announcement.

As for Nkrumah, his friend and sometimes rival President Sekou Toure offered him refuge and made him the honorary co-president of Guinea.

He was to spend five years in his new home engaged in writing projects and cultivating roses while waiting for the people of Ghana to call him back. Eventually, stricken with cancer, he was flown to a clinic in Bucharest, where he died on April 27, 1972.

To a larger extent, Nkrumah’s ‘violent’ removal from office, unfortunately, brought Ghana in line with what was emerging as the trend in Africa. That is the military intervention into politics.