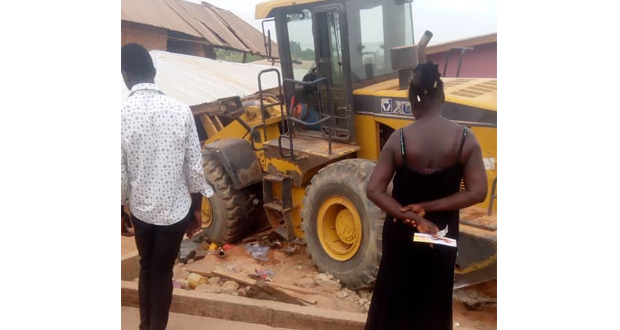 There were bloody scenes at Aputuogya Nkwanta in the Bosomtwe District when three people were killed in a gory crash on Friday morning.

A speeding caterpillar reportedly veered off the road and ran over four people, killing three instantly.

The fourth victim, who survived the bloody accident, reportedly sustained life-threatening injuries and was rushed to the hospital.

The exact identities of the three deceased persons and the injured were not immediately available.

An eyewitness disclosed that around 7 am on Friday, the victims were standing in front of their house when from nowhere the caterpillar, which was working on a road in the vicinity, suddenly veered off the road and ran over them.

The police are yet to ascertain whether the caterpillar driver lost control of the steering wheel or whether it was due to a fault.

The eyewitness said the accident attracted a lot of curious people to the scene, who tried in vain to rescue the victims trapped under the heavy-duty machine.

The whereabouts of the driver of the caterpillar were not immediately known but sources said the police were investigating the crash.