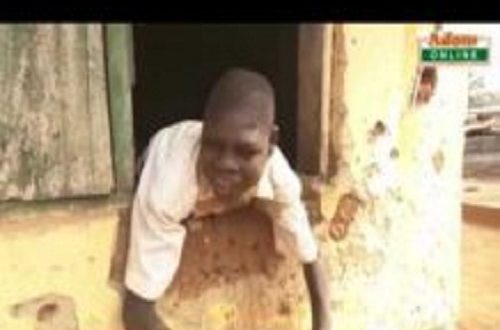 A family in the Nkwanta South District of the Oti region has for over 19 years locked up their 26-year- old son, Abass Basty, over a medical condition.

The only place he finds solace in is the little room where he passes urine, defecates, eats and sleeps with the only source of light through a broken window.

The man’s plight came to light after Adom News’ Regional Correspondent, Obrempong Owusu, paid him a visit after a tip off from neighbours the man begs for food from on daily basis from his window.

Speaking in an interview on why Basty has been held hostage in the room, his father, Mallam Abdullai said it was to save the face of the family from societal pressures and embarrassment.

According to Mr Abdullai, handling Basty became a difficult task for him after he was abandoned by the mother when he was 18 months old and thought locking him up was the way out.

He was subsequently given to his grandmother to assume the role of her mother until her demise.

His sister, Abua Alhassan, who disclosed the condition had deteriorated after the death of their grandmother, added that she baths and clothes Basty every three days after which she locks him up again.

Mr Abdulai, the father of the man, who said his call for support over the years had proved futile, is once again calling on philanthropists and the State to come to their aid.