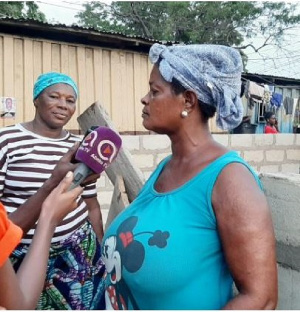 A 52-year-old woman, Felicity Boah, popularly known as Adwoa Serwaa, has appealed to government to assist her reclaim her small piece of land which has been given to one Moses Apkiletey, a Policeman by the Ghana Railway Development Authorities.

According to her, the small piece of land on which she prepares meals for sale at the Railways, specifically at Abuja inside the CMB market was given to her by the Railway Authorities over 35 years ago, claiming that she was asked to vacate the premises by the same authorities for the rightful owner to take over.

Narrating her ordeal, Adwoa serwaa explained that one day she was in her wooden structure on the land when about 17 policemen came to forcibly throw them out of the place.

In her attempt to resist, she said one of the policemen molested her, handcuffed her and sent her behind bars around 7.p.m. that day and was released about 15 minutes later.

“I cook here and sell at the Railways, near CMB market. I have Been here for 35 years. Few months ago, a policeman came to write on it saying it belongs to him. When I went to Railways and they checked they said Town planning gave it to me, but it was given to me by Railways and I was paying GHC20 every month until they stopped coming here for the money,” she said.

“No one told us this place belongs to the police. The railways asked us for our plan, they said it’s for Town planning. They did not tell us anything, they only told us to leave in three days. We went to tell them we cannot leave here, they brought more police to demolish everything. They assaulted me and handcuffed me and sent me to the police station around 7.00p.m and I was released around 7,15.,” she added.

Adwoa serwaa also said,”The Commander asked us to come back and we rebuilt our structure, and they did not come here till yesterday around 5:30 when they came to destroy our wooden structures and when we came early in the morning we came to meet a walled structure on our land.”

She further explained that it took the intervention of her worker to pack out the cooking utensils and the cooking items o prevent it from being damaged by the police.

“This, morning we came here around 6 am. One of my workers packed the things to prevent it from being destroyed. We have not been to the police station because they all support him. We need our land back.We are calling on government to help us get our land back..” she cried.

Meanwhile, the Atinka News Team contacted the Commander at Railway Police Station, Dsp Emmanuel Ofori Asante, he explained that the land was leased to the policeman, in 2002 and he had been paying for it yearly, although he was not operating on the land.

He explained that according to the law, a license is subordinate to a lease adding that the woman in had just a license which allows them to operate on the land temporary while the policeman had a lease.

He debunked the allegations that the police molested the woman when they stormed the land, stating that the woman rather attacked the police while the demolishing was ongoing.

Dsp Emmanuel Ofori Asante also stated that About November 2019 when the issue was presented to him, he demanded railways to provide the documents of the two for investigations and they later found out that the land belonged to Moses Apkiletey.

“Per the laws, a license is subordinate to a lease. A license can be withdrawn at short notice without compensation. Moses Apkiletey has documents and has paid for the land. It was destroyed by the Railways and not the police. He pays for the lease every year..Because if he does not it will be taken from him,” he added.